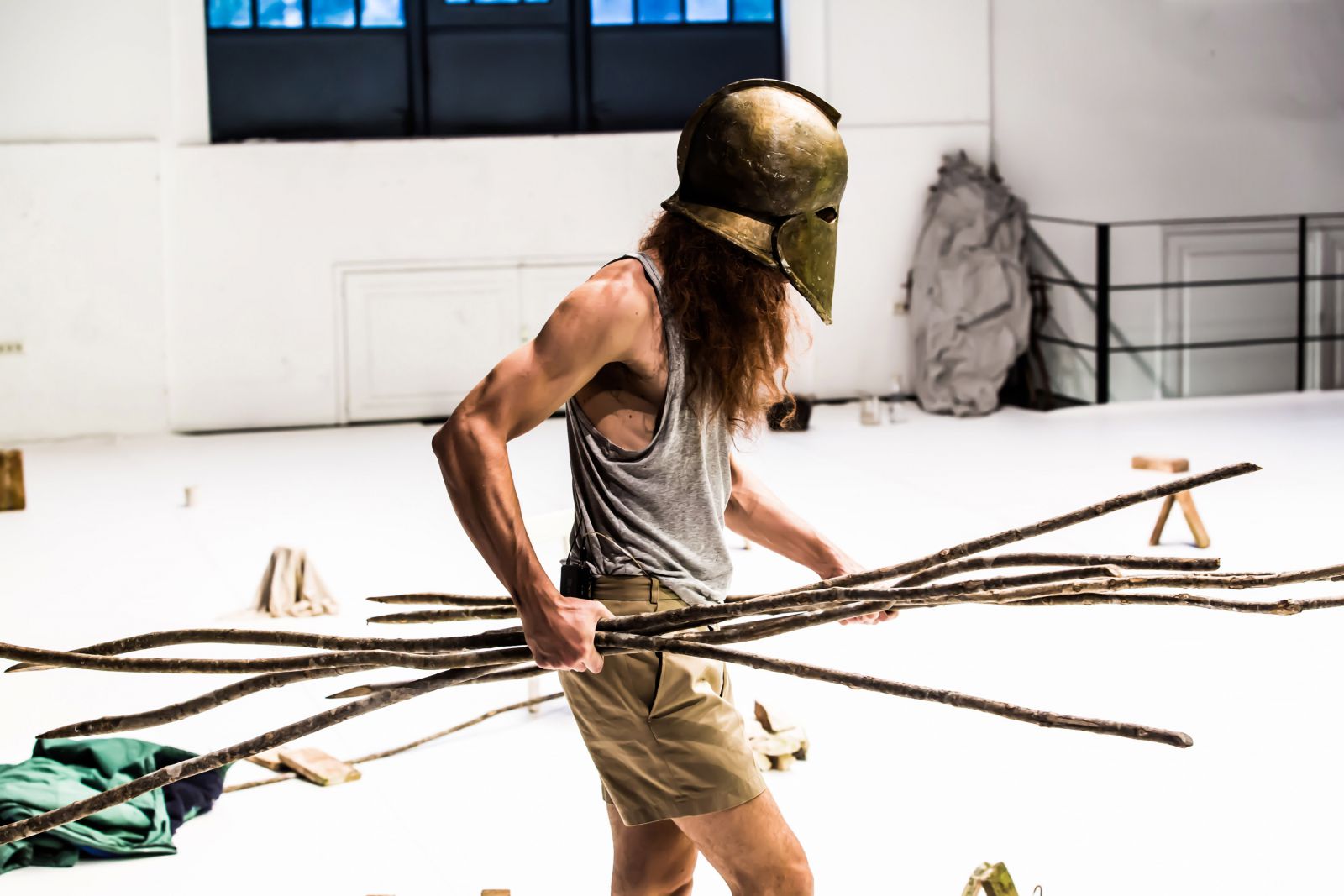 In his performance, Staging a Play: Antigone, Matija Ferlin continues with his reflection on the concept of solo performances, and on the expanded concept of his Staging a Play series. By choosing Antigone, Ferlin decided to adopt the approach of complete reduction of the stage, for a minimalism, with which he wants to reduce the character heterogeneity of the play in its functions to a single performing body, while at the same time preserving the entire narrative and logic of dramatic situations. By assuming the roles of all protagonists and their relationships, Ferlin exposes his performing tools – his body, movement, and speech – to a series of situations on the limit of performing possibilities, as well as at the limit of theatre and dance conventions. In this mono performance, Matija Ferlin enters the deconstruction of the theatre conventions and of his performing habitus, with the desire to create a choreographic whole of an extremely delicate physicality in juxtapose it to a spoken word. The performance Staging a Play: Antigone is based on Sophocles’ tragedy Antigone, translated by Don Taylor.

“On the stage, Matija Ferlin is a kind of god – moving around objects, he resembles a child at play who is creating their own worlds locked in their world. At the same time, he is also on stage as a person who should be embodying all characters of the Antigone through texts, but never really is due to the never seen action of pronunciation.” Maša Radi

Matija Ferlin (1982) graduated at the School for New Dance Development in Amsterdam. He then worked in Berlin, where he focused on the research and rearticulating of different concepts of stage creation. Upon his return to Pula, he focused on researching and rearticulating different concepts of stage creation, as well as other media such as short movies, videos and exhibitions. He presented his work at various festivals in Europe and America. He collaborated with various artist such as Martin Butler, Ame Henderson, Sasha Waltz, Maja Delak, Aleksandra Janeva, Luc Dunberry, David Zambrano, Keren Levi, Ivica Buljan, Mateja Koležnik, Goran Ferčec, Heinz Peter Knes, Claudia de Serpa Soares, Sasha Waltz, Jasna Žmak, Paul Mpagi Sepuya, Christophe Chemin, Mauricio Ferlin and others. In 2011, New York‑based V Magazine recognized him as one of the most promising young choreographers.